University of Patras takes part in the European mission of launching 50 cubesats (miniaturized satellites) built by universities all over the world. The cubesats used are 10cm x 10cm x 20cm and are equipped with several sensors for scientific research. The objective of this mission is to carry out atmospheric research in the lower thermosphere (200km - 380km altitude). Out of the three available sensors, UPSat contaisn as a payload the m-NLP science unit, a multi-Needle Langmuir Probe together with several thermistors. The cubesats will be launched to the International Space Station and from there they will be released to orbit. I have contributed to the project from Feb. 2012 (proposal writing) until Feb. 2016 (development of in-house EPS optimized prototype). Please see the project's current progress on UPSsat's website.

Apart from the science unit, cubesats need to have the functional unit, which is responsible for providing the usual satellite function (bidirectional communication, attitude control, power). Therefore, a  collaboration between the departments of Mechanical Engineering & Aeronautics and Electrical & Computer Engineering formed the teams for each subsystem: 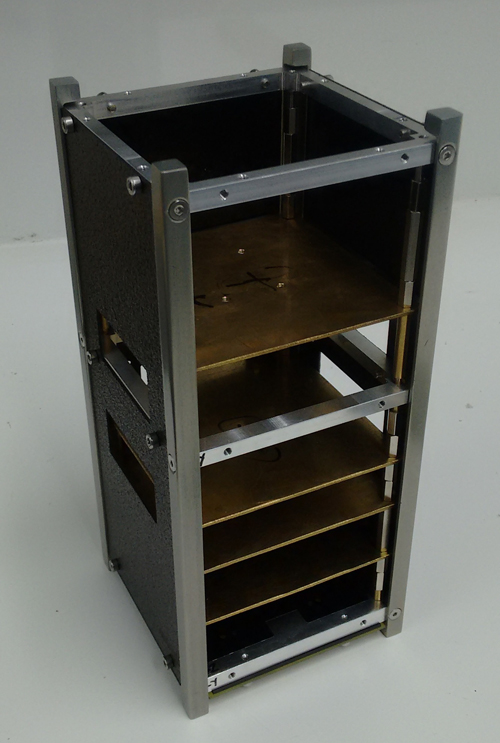 (pictures of the developed cubesat frame, together with the m-NLP unit and the stacking of the various boards)

The role of the the electrical power subsystem is obvious: continuously provide the necessary power under specific voltage to all other systems (ADCS, COMM and Science Unit). To achieve this, the cubesat has 7 photovoltaic panels mounted on its sides. As one full orbit lasts about 90 minutes and the Cubesat is during about 30 minutes behind earth, a battery unit is also installed. Therefore, the EPS has two stages, a boost stage that harvests the solar power and stores it into the battery bank (performing maximum power point tracking - MPPT) and a buck stage, which supplies a 5V and a 3.3V rail with power.

Even though the EPS board needs to be compact (one 10cm x 10cm double-sided board with one side almost entirely used to mount the battery bank), effort was given to maximize the efficiency of the converters by theoretically calculating the optimal design parameters. The nominal power of each solar panels is 2.5W and so four boost converters were designed, three of 5W nominal power (two solar panels were connected in parallel on the input) and one 2.5W. To minimize the output filter needed, the converters operate in interleaved mode. Numerous experiments were conducted in order to determine the power losses of each component (semiconductor switch and inductor), in order to determine the appropriate inductance needed and switching frequency for each converter.

For the battery bank, three 18650 Li-ion batteries were connected in series. As the cubesat must be compliant to strict specifications, each battery cell has its own protection circuit and also the microcontroller responsible for the EPS constantly monitors the voltage and current of the batteries and shuts off the rails to non critical loads if necessary. Two very high efficiency buck converters were selected to step-down the battery voltage to 5V and 3.3V.